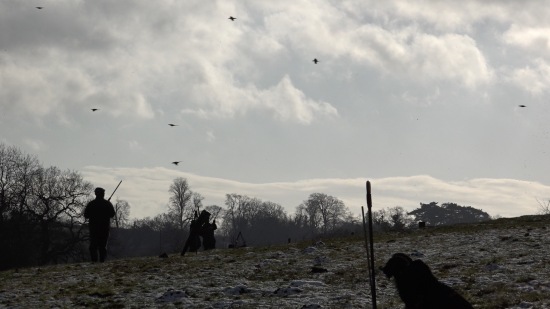 (from the Run and Gun Videography blog)

Belvoir Castle, on which estate I live, has been the subject of a 2 year project to bring into being the recently found 200 year old plans of Capability Brown, probably the most famous landscape architect in England. In the last year a TV program has been in the making which airs its first of 3 parts tonight.

Quite aside from all that, Belvoir Castle has become a world-class shooting estate with people coming the world over to shoot here during the season. It has been being run by Phill Burtt, the David Beckham of the shooting world.

It was decided just a few days ago that a Belvoir Shoot video should be done and gotten onto the Guns and Pegs website, the largest shooting related website in the world for both those seeking venues and those looking for them. This was to coincide with the airing of the Capability Brown program.

Luckily I had some footage shot last year to add to the mix.

It turns out now that this is my favorite marketing video to date– shot completely off-the-cuff, mainly with the Sony PXW X70 and some NX30 footage.

It’s a long and interesting story that I may detail in an update of Run and Gun Videography–The Lone Shooter’s Survival Guide, but for now, just a couple of notes.

Anyway, I’ll leave it at that for now.

You Americans might not understand what you’re looking at. It’s just the time-honored tradition of English shooting, right on down to wearing the right outfit, with breaks for champagne and sloe gin, bacon or sausage sandwiches, ending up with drinks and a dinner.