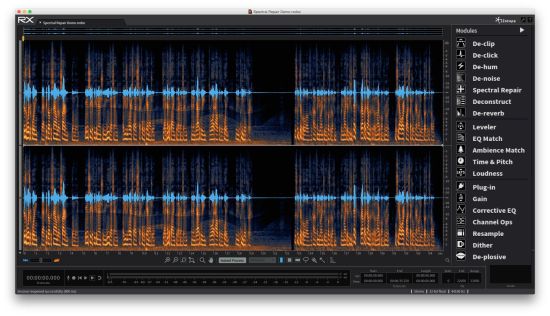 Apparently this has been around for years and I just found about about it.

Well guess what? You can get rid of echo and reverb seamlessly, easily and non-destructively.

But that’s just ONE of the tools in the RX5 Audio Editor.

It’s essentially an audio repair tool box. And that means anything from fixing a bad recording to enhancing a good one. Anything from subtle clicks on a guitar recording to sirens, back-up beepers, hums, buzzes and coughs in the background of interviews. Easily, quickly, seamlessly and non-destructively.

I was playing with the free download today and got rid of some annoying room echo in a couple of interviews. I didn’t really know what I was doing to be honest, but got the echo handled. But then I moved onto a more important task.

I had an interview which was done in a relatively quiet conference room in an industrial plant. I miked the guy real close with a rifle and had a close lapel on him in pure self-defence. But even as I recorded it, I knew I had several frequencies of hum and whirring from the machines in the plant which were not justified in the shot (plant not visible in background).

Of course hum and buzz are fairly narrow frequencies and you’d think it’s a matter of using the parametric equalizer or some form of EQ to isolate and remove or reduce the offending frequency. That’s how I’ve always done it, but never without adversely affecting the voice. Now I know why: Every such buzz or hum has harmonics. You can’t get them all.

RX5 to the Rescue

This time I watched a tutorial rather than stumble through.

I had to use two tools: the de-hum and de-noise tool. I couldn’t believe how fast and easy it was. It literally took a couple minutes as a newbie.

Then I went to export the file and found out it would’t let me because it was the free version.

Well, they got me.

So I bought it as fast as I could. Unfortunately I had to close the program to initiate the buying process which meant that the work wouldn’t be saved. (no saving in the free version)

Amazingly, as soon as I entered the serial number, the program opened back up with my processed audio still in there. But just for the fun of it I re-did it anyway to see if I could make it better and do it faster. And I did. I found one more barely audible frequency that I had missed and cleaned it out as well. There are different ways of doing things and this time I chose an automated process. It was simply a matter of isolating a short quiet spot, clicking ‘learn’ and then clicking ‘process’. Took seconds and it was done. It spotted the problem frequencies and their harmonics and replaced each with bits of recording either just above or just below each frequency and harmonic.

The most amazing thing? It didn’t affect the voice recording (which was a strong and present recording).

Hey, don’t take my word for it. There are a lot of videos by both iZotope and others demonstrating what it can do. They’ll come up when you search. Watch them and see if you don’t get shit-faced too.

Here’s a good summary video to get you started.